This typewritten poem written by my great grandfather, George McClelland Browne, was found in his little leather wallet/folder from his Station Agent days in Delhi, Minnesota, 1901; his name and date stamped on the wallet.  He was quite sick with Bright's Disease, which caused them to move out West at the doctor's advice.

Written on a bed of sickness which accounts for the degree of sadness, melancholy, and sobriety, running through the piece.

I wish I was a (sic) angel,
With robes of snowy white,
I'd fly around the universe
And scare the folks at night.

I'd sing in people's closets,
And haunt them in their rooms,
With songs of sweetest music,
And most melancholic tunes.

I'd show myself to lots of folks
To hear what they might say;
then would say out loudly,
And vanish quite away.

I'd promenade Fifth Avenue
In goods which weren't in style,
I think there'd be somebody then
Who wouldn't crack a smile:

I'd move in obscure corners
And frighten all my Aunts;
I'd fix the boasting coward
Who is not afraid of "ha'nts""

I would visit Brother Jackson
in his pulpit, tall and grand,
And write on the Bulletin Board, in Greek,
"World's coming to an end:"

I'd stay out in the barnyard
And hide behind the doors
To jump out at my Uncles
When they do their evening chores.

I'd bother people half to death;
And serenade my cousins
With furious yells, until they'd think
There were ghosts by the dozens.

I'd haunt Professors' studies,
And thumping dusty desks
And make the learn-ed fellows think
The house was full of spooks.

And through the photographic lens
Present an apparition.:
'T would make my dearest brother
Even doubt his own condition.

I'd make Aunt Etta jump and yell,
She would appear diff  (illegible) 'antic'
The lightest word from one unseen
Would drive her nearly frantic.

I'd travel round to Germany
And p'raps I'd go to France;
And rise before the Chinamen
To see the darlings dance.

I'd move about quite noiselessly,
in groups of fearful Spanish;
And grin a most unearthly grin,
And shout to see them vanish.

I would extinguish all the lights
In all the different churches;
And take the fowls mysteriously
From off their midnight perches.

I think I'd have just lots of fun
If I but were a spirit;
I'd make folks think their time had come-
Or something mighty near it. 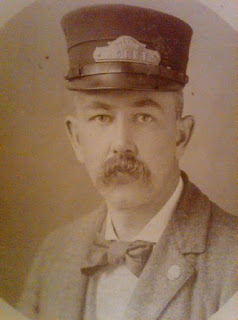 Posted by Shirley Worthen at 12:22 PM