Glenn E. Curtis, the 16-year-old son of Mr. and Mrs. Charles H. Curtis of the Capay Vallley, met a tragic death early Sunday morning by the accidental discharge of a shotgun in his possession  The news of his sad fate proved a great shock to the many friends of the family.

Young Curtis and F .J. Kelley, a son of Mr. and Mrs. F. W. Kelley, neighbors of the Curtis family, went out Saturday evening on a hunt for some coyotes which have been annoying the farmers in the vicinity of late.  They lay in wait all night for their game, but their efforts were unsuccessful.

About 6.30 o'clock Sunday morning they started home from their fruitless hunt.  While sitting on a fence in the Tancred neighborhood, young Curtis' gun was discharged by the accidental pulling of the trigger, which came in contact with a rail of the fence.  The muzzle of the gun rested against Curtis' body and the full charge entered his breast.  With a cry of "I'm finished" the lad fell to the ground.  Young Kelley ran for assistance, and returning with the wounded boy's father they found that he had already passed away.

The terrible shock to the family, who had not before heard of the accident, when the lifeless body was borne into the family home (NOTE:  the home I lived in until I was five--Shirley), can better be imagined than described.

Young Curtis has enjoyed a most excellent reputation during his residence near Capay.  He was born in Dallas, Oregon, and came to Capay with the family three years ago.  Beside his parents he leaves two sisters and three brothers.  He was a nephew of Mrs. Emma McCullough of near Cacheville.

The funeral will be held from the family residence at 10 o'clock this morning, and interment will be made in the I.O.O.F. cemetery at Capay.

The home in which Glenn Curtis lived and in which I lived in until I was five years old--Brooks, California.

The ranch on which Glenn Curtis met his death by accidental gunshot (and on which I was born and raised)--Brooks, California. 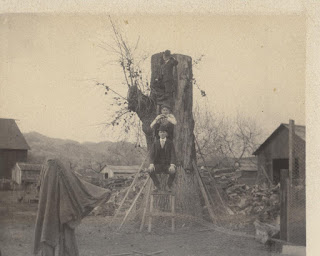 Posted by Shirley Worthen at 4:22 PM