I find myself doing much reflecting and enmeshed in a turmoil of emotions after a visit to the Deep South.  I have decided to record some of those thoughts here.  These thoughts are simply personal reflections and I do hope will not be taken personally by anyone and shall never include any names (of course!).

I only became acquainted with the South rather late in life; other than, of course, books and movies.  Our cozy little family-owned software company headquartered in Northern California and my place of work for nearly ten years; was acquired by a large holding company in England, who had acquired several other such companies.  Our "new" company headquarters was to be located at one of these other software company's offices in Tuscaloosa, Alabama.  It then became inevitable that I would be making quite a few visits to the South.

I have seen the images from Birmingham, Alabama that is seared into the minds of American citizens born in the early 60's or before.  I have read many, many things and seen many movies and documentaries about racial conflict in the South past and present.  One of the most recent and indeed, very profound is Condoleeza Rice's autobiography, "Extraordinary, Ordinary People"--which I recommend that any U.S. citizen read.

Of course, things are vastly improved and in many respects, there are not any noticeable problems on the surface.  As far as racial tensions, for the most part a truce has been called by both sides.  I found this very fascinating and realized that there are many people much more forgiving than I am.  That is probably a very good thing, indeed!  There are people who were victims of the fire hosings in Birmingham in the 60's (and even worse crimes); who are now living peacefully alongside those that perpatrated the wrongs upon them.  Condoleeza Rice herself is a perfect example of laying the past to rest and moving forward in the best possible manner.  When in the South, we have been told that there is really no problem at all and has not been for decades.  Vast improvement aside, I think that is an exaggeration.  My husband, who received his Ph.D. from the University of Kansas; would have attended LSU (Louisiana State University), had it not been for rampant prejudice in the late 60's.  They had the best Ornithology Department in the country at that time (study of birds, his field of study).  He was back in Louisiana at the time interviewing with the Professor in charge of the Ornithologoy Department.  He asked about the situation with racial tension and prejudice.  He was told that that was no longer a problem!  Everything was worked out now.  In fact, there was a black girl in the program, and during their most recent field trip, while the restaurant they stopped at would not allow her inside, they were allowed to take her a bag lunch out to the bus.  That was the end of the interview as far as my husband was concerned, and the end of him considering attending LSU, to which he had a full scholarship.

Jump ahead by 30+ years and that's when our visits to the South, to our home office in Tuscaloosa, Alabama started.  One of our first experiences causing these reflections, occurred at the University of Alabama, Natural History Museum, Tuscaloosa, Alabama,  where our company held its awards banquet and ceremony that year.  This being the very same University where the Governor of Alabama stood on the steps at the front entrance in the year of my birth (1963), and blocked the entry of black students to the college due to the laws of desegratatioin which were to be enforced.  To those outside of the South, I must admit this is what Tuscaloosa, Alabama is "famous" for, and the University there, in particular.  Things are still named after he and his wife all over the area:  his wife's name is Lurleen.  The first question that pops up in my mind when I see these street signs, etc. is "what kind of name is Lurleen?"  This particular year at the awards ceremony,  my husband received the bulk of the honors and awards, of which he was presented many, for being the top salesman.  Afterwards, an older black man who was with the catering company came up to him and shook his hand, praising him for being a wonderful and wise man.  He was the sweetest gentleman you can imagine; and to us, it seemed he had stepped out of the pages of a storybook, directly out of the past; he seemed to us the very personification of Uncle Remus.  We will never forget that moment, either one of us.

Well, many other items have come up in discussions and those won't be recorded here.  Our jaws drop when we hear about fathers and grandpas who were in the KKK, great grandparents who were the last slaveholders in the country but whose slaves "weren't at all unhappy since they were taken good care of and treated like family". Or as I drive down the freeway, and the vehicle I see approaching in the rear view mirror has a Confederate flag as its front license plate.  At those moments, I know I'm a "damn Yankee"; whose great great grandfather marched down to Alabama from Grand Rapids,  Michigan with the 13th Michigan Infantry, Company C and fought in about 25 of the major battles of the Civil War; oldest man to volunteer for his unit at age 44.  After the end of the Civil War he and his family moved, by wagon, out to California; where his son founded the ranch I grew up on.  I still have a beautiful antique clock that has fallen to pieces, which they brought across the country with them (and which I hope to have repaired someday)!  There is a reunion history of my Charles' Civil War regiment in which stories are recorded of the memories of his units' veterans.  One of them wrote of how he and his wife visited Alabama, Tennessee and Georgia anonymously and even sat in on a theater production.  This Yankee veteran was thinking during the play "what would they say or do if they knew I was a Yankee veteran who had fought here!?"  They were very nostalgic of the area where so much suffering and loss of life had taken place.  In fact, my 2nd great grandfather, John Baker; had always wanted to return to Tennessee to visit the area and he did so in 1910 when his son-in-law purchased some land there.  He died of a heart attack while on his visit there.  I know all this is not a good dinner topic in Tuscaloosa, Alabama and bite my tongue. 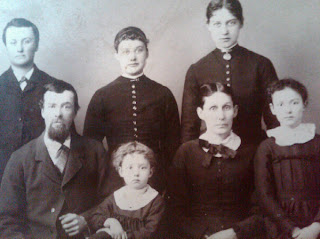 The John Simon Baker family.  John Simon is sitting in front on left. 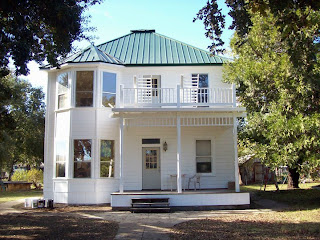 The home on the family farm in which my family has lived since my great grandfather Charles H. Curtis (Charles Frederick's son) lived there in the late 1800's/early 1900's. 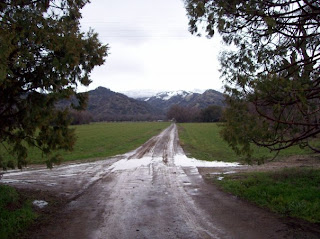 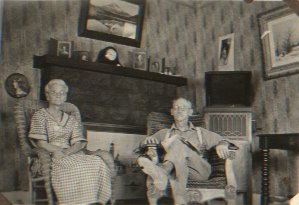 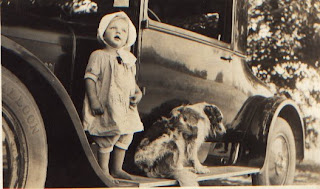 Posted by Shirley Worthen at 10:17 PM